Race 2 at the Nürburgring: “You can’t win them all”

With the top eight finishers starting Sunday’s race two in reverse order, Van der Linde was eighth on the grid with fellow countryman Jordan Pepper on pole after finishing eighth in race one. Although he was able to work his way up to fourth place …

Runaway championship leader Kelvin van der Linde clinched his fourth successive win in the Volkswagen Scirocco R-Cup. The opening race at the Nürburgring had to be suspended on lap 11 of 14 following a crash involving Lukas Schreier. The German rolled several times, but was … 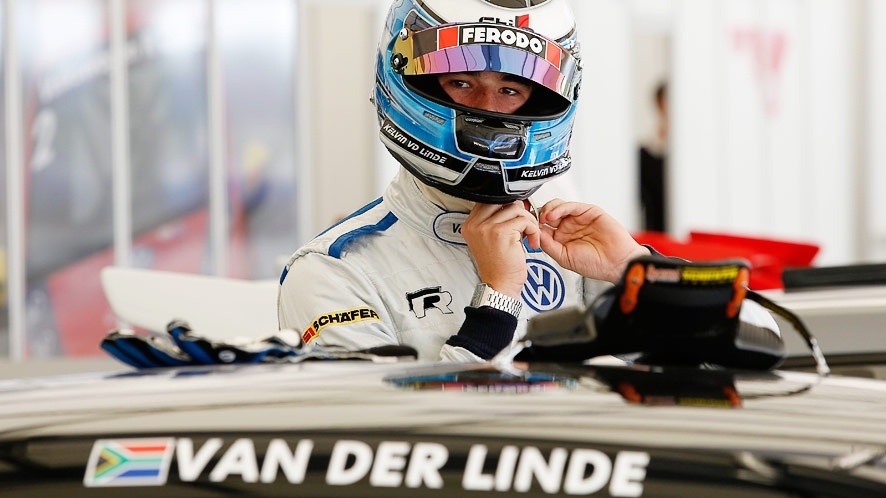 Qualifying at the Nürburgring: Van der Linde faster than Ahlin-Kottulinsky.

Early bird Mikaela Ahlin-Kottulinsky caused the first shock of the day at the Nürburgring, surprisingly qualifying second fastest in the Volkswagen Scirocco R-Cup. With qualifying getting underway at 08:25, the Swedish driver flew out of the blocks to secure her best starting position of the season in a time of 1:41.768 minutes. Motor racing talent runs in the family: back in 1980 her grandfather Freddy Kottulinsky (S) claimed Volkswagen’s maiden victory at the Rally Dakar, at the wheel of a Volkswagen Iltis.

Only championship leader Kelvin van der Linde was faster than the flying Swede. The 17-year-old South African was once again almost half a second faster than the rest of the field, clocking an impressive time of 1:41.276 minutes. Van der Linde comes into the weekend at the Nürburgring on the back of three successive wins in the only natural gas-powered one-make cup in the world. A 1:41.841-minute lap was enough to secure third place on the starting grid for Manuel Fahnauer, who leads the Junior standings.

After an impressive third place in Friday’s practice, Christian Danner (55) was once again the pick of the Legends, but had to settle for 17th place with a time of 1:42.951 minutes. Fellow DTM legend Emanuele Pirro (Italy / 51) and rally champions Markku Alén (62) and Juha Kankkunen (54 / both Finland) also showed that they can still mix it with the 19 talented youngsters, despite the early start. The first race in the Eifel Mountains gets underway at 12:55 today, with race two of the fourth race weekend scheduled for 15:20 on Sunday.

“I am looking forward to the race”: Statements on the race at the Nürburgring.

Following hot on the heels of the FIA Institute’s announcement earlier today of the opening of nominations for the Africa regional training and selection event of the Young Driver Excellence Academy, MSA is proud to announce that Kelvin van der Linde has secured MSA’s nomination …